India was the home of one of the oldest civilisations of history, which grew up along the banks of the Indus River. The Indus Valley culture and the Vedic culture, which succeeded and were influenced by it, were the basis for the development of later Indian society, in particular for the major religious systems of Hinduism, Buddhism and Jainism. 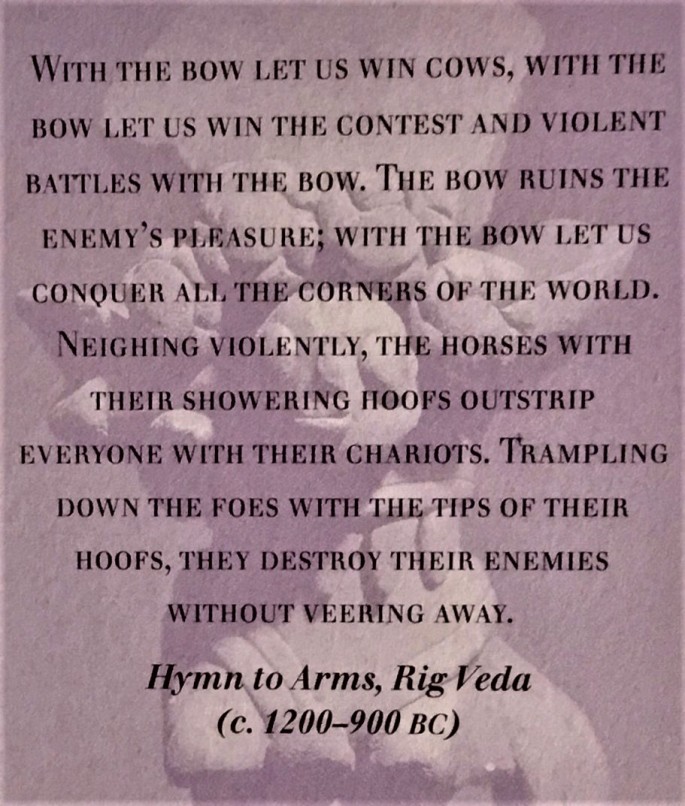 3500 BC: beginning of Early Indus period

2500 BC: beginning of Harappa culture in the Indus valley

1650 BC: Indo-Aryans begin to arrive in India

1000 BC: Indo-Aryan settlements established in the Upper Ganges plains.

The early history of India is very difficult to recover. Archaeology can reveal something about the way of life of its earliest inhabitants but little can be learned from written evidence. The earliest works of Indian literature, the Vedas, were composed in the centuries after 1200 BC, but they were not written down until probably the 5th century

Although the subcontinent had substantial human occupation from the Stone Age onwards (see Map 1), the first great Indian civilisation was the Harappan culture which emerged in the Indus valley in the third millennium BC. Like the slightly older civilisations of Mesopotamia and Egypt it was based on flood-plain agriculture, as the cultivation of the fertile land on either side of the Indus was able to provide enough of a surplus to support a complex urban society. Several substantial cities were built (see map 2), of which the best explored are Harappa and Mohenjo-Daro.

The Indus civilisation also developed writing and about 200 seals with short pictograph inscriptions on them have been discovered. Although it has not yet convincingly deciphered, the language was almost certainly an early form of Dravidian related to languages still spoken in southern India and the hills of Pakistan and distinct from the Indo-European languages such as Sanskrit, that became prominent in the following millennium.

From around 1500 BC a new culture becomes apparent in India. This is now known as Vedic civilisation, and was characterised by a new language and rituals, and the use of horses and two-wheeled chariots. The traditional way to explain the changes was to talk of an “Aryan invasion” with mounted bands of warriors riding in from the northwest and conquering the indigenous Indus population before moving eastwards to the Ganges. Support for this picture was claimed from one of the Vedas, the Rig Veda, where the Aryans are presented as conquering the cities of the darker skinned indigenous Dasas. It is more likely that the process was gradual and that small groups of nomads entered the subcontinent from the northwest in the early second millennium and settled alongside the existing population. They absorbed elements of the Harappan culture, but were able to establish themselves as the dominant elite (arya is the Sanskrit word for nobility). Over the next centuries their Aryan language was adopted by more of the population and at the same time their influence spread eastwards to the upper Ganges.

Southern India was left largely untouched by the civilisations of the north. There were probably trading links between the Indus valley and the southern tip of the peninsula, but there was no urbanism in the south, where villages were the normal form of social organisation. However, some limited form of common culture in the south is suggested by the distinctive megalithic tombs found over most of the area.

In the north, where unlike the hilly fragmented geography of the south, great plains lent themselves to large-scale agriculture and the growth of substantial kingdoms, cultural coherence became more widespread as, in the centuries that followed the emergence of the Vedic culture, the new civilisation spread gradually east from the Indus to the Ganges. Evidence from finds of pottery characteristic of particular periods suggests that there was also movement southwards (see map 3).

The early Aryans had been pastorals, but over time they adopted agricultural practices and as they became increasingly settled, they established larger communities. Once again cities began to be built although they were not on the scale of Harappa and Mohenjo-Daro, being constructed largely from mud bricks. No known public buildings survive from this period. Yet by the 5th century BC there were political entities that might be called states or polities, most significantly Magadha, with its substantial fortified capital at Pataliputra. 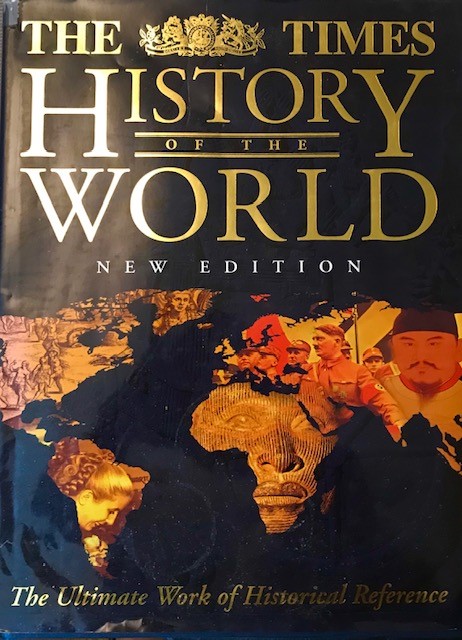 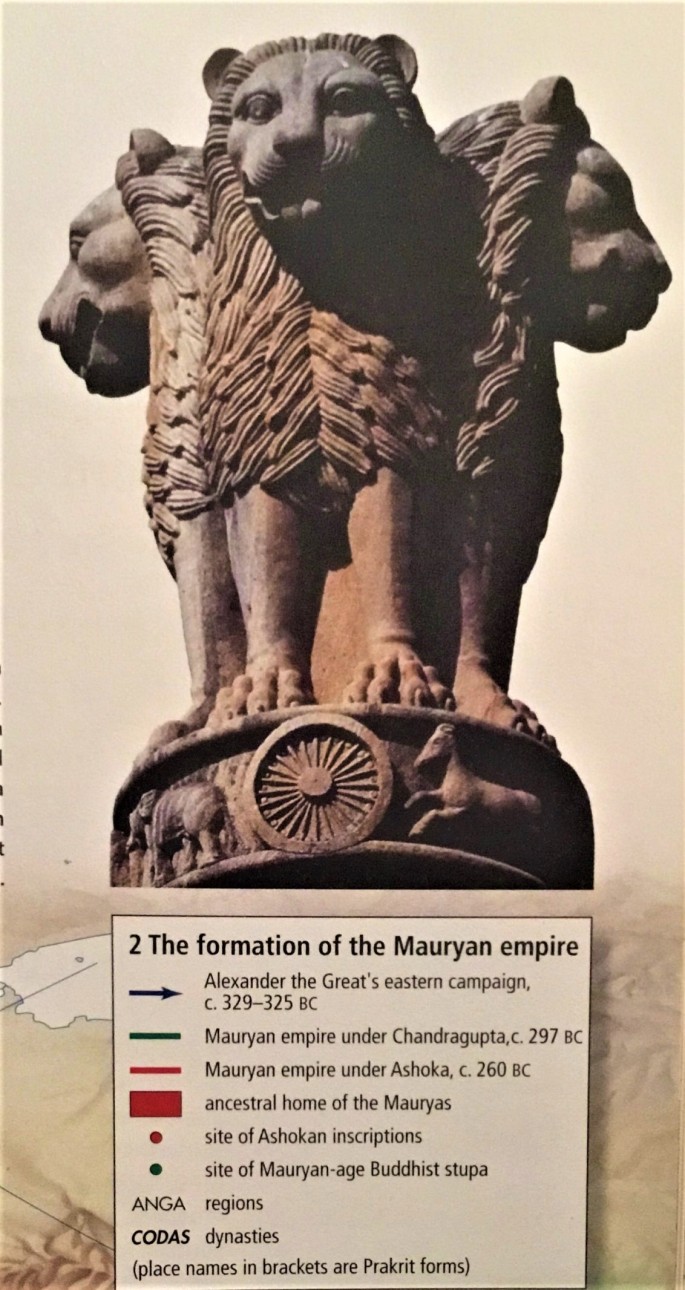 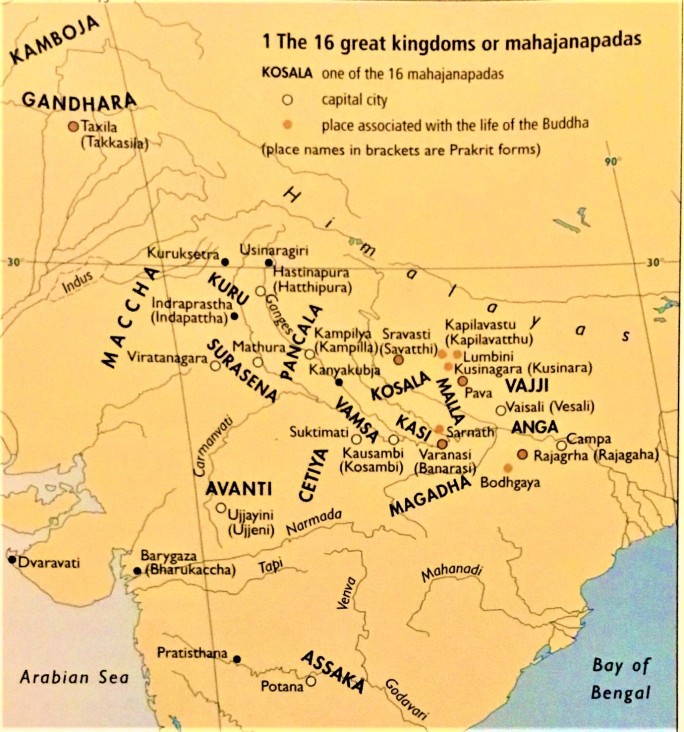 In 500 BC, north India (map above) was dominated by small polities, one of which, the eastern kingdom of Magadha contained the seeds of empire. Eastern India was also the home of Gautama Buddha who was born in around 486 BC in Lumbini near Kapilavastu, renounced the pleasures of royal life and attained spiritual enlightenment at Bodhgaya. He gave his first sermon at Sarnath and died at Kusinagara from where his remains were carried away by kings and enshrined in burial mounds known as stupas.

Chandragupta Maurya transformed the Magadhan kingdom into an empire, which was further extended and consolidated by his grandson Ashoka (map above). After the violent conquest of Kalinga, Ashoka converted to Buddhism and pursued a policy of conquest through moral teachings (dhamma). Many of his edicts are located near Buddhist places of worship. According to Buddhist legends, Ashoka built and embellished 84,000 stupas and sent Buddhist missions to many regions, including the Hellenistic kingdoms to the west, south India and Sri Lanka.

In the first century BC migrations by the Shaka clans had destabilised the northwest. They were followed by new invaders, the Kushans, who reduced the Shakas settled in western India to provincial governors (Satrapas) and subjugated much of north India, although they failed to dislodge the powerful Satavahanas of Central West India (map below). By the 3rd century AD, the Kushan empire had ended: its western reaches were tributary to the Persian Sassanids and its eastern provinces fragmented into small polities.

As a result of the martial alliance, the Guptas maintained friendly relations with the Vakatakas (map below), but were hard pressed by the Huns from the late 5th century. After a number of invasions, the Hun king Tormana defeated the Guptas at Airkina and then sacked the Gupta city of Prayaga in AD 511. However, the resulting Hun rule over North India was short lived.

The first centuries of the Christian Era witnessed the efflorescence of urban life, in part facilitated by vigorous trade with the Mediterranean world and with China (map below). Roman coins and artefacts indicate an influx of gold in exchange for Indian exports. At the same time, Buddhism spread along the trade routes across central Asia and beyond to China. 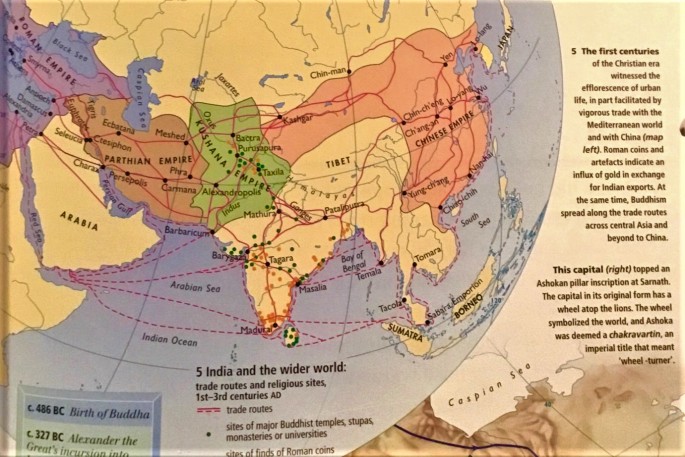 From 500 BC to AD 550 south Asia witnessed a succession of metropolitan empires centred in north India – the Kushanas and the Guptas. Although centralised political control was often weak, for the first time the entire subcontinent was integrated within a single but diverse cultural field.

By about 500 BC North India sustained 16 well-articulated polities, or mahajanapadas some still essentially tribal republics and others already monarchies (see map 1). The region witnessed tremendous change, as the consolidation of settled agriculture led to the emergence of cities and more complex political systems. Such changes made the older sacrificial cult of the Vedas, which had its origins in the pastoral communities of the Aryan tribes, increasingly obsolete. In its place, at the end of the 5th century BC in the heart of the Gangetic plains, the founders of Buddhism and Jainism formulated their radical new teachings.

During the 5th century BC, the number of mahajanapadas gradually diminished to four – Vajji, Kosala, Kasi and Magadha. After a century of wars, the single kingdom of Magadha dominated with its splendid new capital of Pataliputra. This was to be the nucleus of the first Indian empire. Shortly after Alexander’s incursion into India in 327 BC, the Mauryan prince Chandragupta seized the Magadhan throne. Chandragupta then conquered the land east of the Indus, swung south to occupy much of central India and in 305 BC decisively defeated Alexander’s successor in the northwest Seleucus Nicator.

The Mauryan empire that Chandragupta founded reached its zenith under his grandson, Ashoka who established his rule over most of the subcontinent (see map 2). Ashoka’s empire was composed of a centralised administrative system spread over a number of thriving cities and their hinterlands. After his conquest of Kalinga in 260 BC, Ashoka publicly converted to Buddhism and adopted a policy of “conquest through righteousness”, or dhammavi jaya. In a number of public orders inscribed on pillars and rock faces throughout the subcontinent Ashoka called for peace, propagated moral teachings (dhamma), and prohibited Vedic animal sacrifices. These edicts written in Prakrit, are the first specimens of royal decrees In South Asia, a type of public communication which would remain important in subsequent times.

Mauryan rule did not long survive Ashoka’s death in 252 BC. In the 2nd century BC, the northwest was repeatedly invaded, both by Greeks from Bactria and Parthia, and then by new nomad groups themselves displaced from Central Asia. First among these were Scythian tribes called the Shakas, who overran Bactria and the Indus Valley in the first century BC. Then the Kushana branch of the Yuehchih horde who had settled in the Oxus valley after 165 BC, gradually extended their rule inland, subduing the Shakas in western India and reaching Varanasi in the 1st century AD. As well as the Oxus and Indus valleys, large parts of Khotan were included in their cosmopolitan empire, centred in Purusapura. Kushana India was a melting pot of cultures – Indian, Chinese, central Asian and Helleno-Roman. The empire reached its height of power and influence under Kanishka, who patronised Buddhism and became extensively involved in political conflicts in Central Asia.

Both the Shakas and the Kushanas took Indian names and were the first kings to adopt Sanskrit at their courts- the first courtly poems and inscriptions in Sanskrit date from this period – though the native kingdom of the Satavahanas of the Deccan continued to use Prakrit. In the northwest Mahayana Buddhism emerged at this time from the more conservative Episcopalians teachings known as Theravada, and developed a more eclectic outlook emphasising compassion and worship in an enlarged Buddhist pantheon.

In the same period, India’s ancient trading links with the West were revitalised and greatly extended as the Roman Empire rose to power (see map 5). Ports such as Barbaricum on the Indus delta, and the entrepot of Barygaza exported

receiving in return a flow of

from the Arab and Mediterranean worlds. Much of the Chinese silk traffic found its way to the city of Taxila before caravans took it further west. Trade led to other exchanges, as Buddhism spread to Central Asia and China.

By the middle of 2nd century AD, the south had also witnessed economic development. The Satavahanas of the Deccan developed a powerful empire and established overland and coastal trading networks and the weaker Tamil speaking kingdoms of the south established poets on both coasts of the peninsula.

In the 4th century, the native dynasty of the Guptas imposed a new rule based again in Pataliputra. Following the campaigns of Samudragupta and his son Chandragupta II, their suzerainty was acknowledged over an area almost as great as that of the Mauryan empire. Until repeated Hun invasions ended Gupta power in the 6th century, the Gupta power saw the blossoming of earlier cultural trends, and has become known as the classical or epic age of Indian history.